For the Marathon des Sables Peru 2017 – Stage 3, Rachid EL MORABITY (D001-MAR) used his favourite strategy once again: letting his direct contestants head the pack, controlling their lead, then accelerating towards the end of the stage to pass them and widen the gap… Gediminas GRINIUS (D236-LTU) had to admit the Moroccan’s domination: “Rachid is a very tactical runner. He patiently waits during the first part of the stages and at the end, he smashes us.” The Lithuanian soldier confesses he’s quite tired – and no wonder: “I’ve just finished my annual break; I haven’t run many miles yet and I drank a lot of beer… It’s tough! The sand killed me!”
Remigio HUAMAN QUISPE (D003-PER) seemed rather fresh when he arrived in second position, more than two minutes behind Rachid: “I hope to be in good shape tomorrow for the long stage. Physically, I’m feeling OK, but I’m a bit tired.”
Erik CLAVERY (D112-FRA) started the stage quite fast before slowing down and finishing in a difficult situation, although he felt “slightly better for this stage; but it was very hot in the dunes, so I was happy to arrive!” Like a few other competitors, Erik seems to have minor hydration issues despite the 10 litres he drinks every day… It is true that the heat and efforts are intense!
Aldo RAMIREZ (D378-PER) did not fulfil the prophecy made yesterday by his fellow countryman Remigio (see our previous PR), but he ran an impressive stage: “I was third almost until the end…but in the home stretch, a hundred metres before the finish line, Gediminas passed me. My initial objective was to reach the Top 10, but now, I’m aiming for the Top 3.”
To say the least, the Top 3 will be keenly contested during the three last stages! In the general classification, Rachid further widens the gap (38 min.) with Remigio, who is himself well ahead of his chasers. In that latter group, three competitors – Julien CHORIER (D111-FRA), Aldo RAMIREZ and Erik CLAVERY – are less than 15 minutes behind him, and they are chased by Gediminas, who is trying to reduce his 25-minute gap with Remigio. Aldo and Julien seem in better shape that Erik and Gediminas, but in ultra-running – and even more so in the MDS – nothing is ever certain until the last stride…

In the women’s category, Nathalie MAUCLAIR (D114-FRA) arrived before Mélanie ROUSSET (D365-FRA) and Rocío CARRIÓN (D215-PER). The general classification follows the same order, but the gaps are widening: 1 hour 30 between Nathalie and Mélanie, and almost 2 hours between Mélanie and Rocío. The fourth and fifth women, both from Peru, are gradually drawing closer to Rocío, who is suffering more and more during each stage. If the first two places seem quite stable, nothing is certain behind them.
In terms of suffering, Nathalie didn’t seem affected by this third stage: “Fantastic, it was beautiful – I enjoyed it a lot! Between CP2 and CP3, we thought the sand was going to be hard, but it was soft…”
Mélanie, who arrived second, commented “For exclusive trail runners, it was tough – much too flat! You have to switch everything off and stay positive – it’s almost like hypnosis!” (laughter) 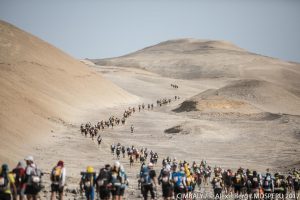 The Marathon des Sables is a 6 day stage race that this year ran from Takkourt N’takouit to Kourci Dial Zaid in Morocco. Over 800 competitors had to carry food and gear across each of […]

A first edition always has a special flavour – that of adventure, of the unknown: the 282 competitors who were present on the start line Tuesday morning of the Marathon des Sables Peru 2017, had come here to get […]